In bookstores now or order from…. 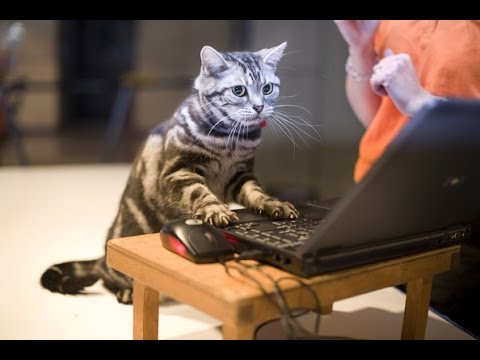 Dogs vs. Cats: No Contest

Published by Karin Esterhammer on March 23, 2018

The news this winter that a Vanderbilt University study proved conclusively that dogs are smarter than cats blared resolutely on the evening’s TV newscast as my cat and I sat on the living room couch. I saw my cat’s face fall. I lunged for the remote control to mute the sound, but it was too late. She had heard it.

I nodded in agreement because I didn’t want to hurt her feelings, cats being so sensitive and all.

As I sat taking in this new reality, I began to worry about the repercussions of such a polarizing study. The findings, which proved that a dog’s brain has twice the cortical neurons as a cat’s, could even become caught in a web of political bickering.

I can already imagine someone calling the aloofness in cats a Republican trait. Therefore, all cats are Republican. Another might argue that the fact cats cover their poop shows concern for the environment, which is mostly a Democratic cause. Public displays of grooming and humping on the front lawn would be labeled “naturism” in a blue state, but in a red state, the owners might be slapped with a fine for lewd conduct.

But let’s go back to the study. Did those scientists study the quality of those neurons? I mean, not all neurons are alike.

Take those bomb- and drug-sniffing dogs at the airport. Does anyone really think they are doing those tasks because they are intelligent? No. They do them for a treat. It doesn’t matter what you just found in your pocket, a piece of gum, a little fuzz ball, wadded up tissue, dogs will bark “Gimme, gimme” and do whatever it takes to get it.

I concede that my cat Princess Petunia will never lead the blind on the streets of New York City. She won’t fetch anyone’s slippers or run after bad guys. But the reason isn’t because she has fewer neurons. It’s because all cats are particular about their treats. They’ll sniff, maybe lick it, and, with a flick of their tails and a haughty jerk of the head, insist on a better quality treat.

Princess Petunia begins to cough up a hairball. I think she’s trying to prove a point. Who would eat that junk?

“But it says ‘under 1.5 calories per treat,’ ” I offer. She reconsiders, but only for a second.

Don’t more refined tastes signal intelligence and the ability to discriminate? A dog would jump up on you and bark, “Come on, just give me the whole bag!”

Princess Petunia wipes off her mouth with her paw, and continues the argument.

“I’ll tell you who isn’t smart: these damn foster kittens you keep bringing home. They wake me up at night, they smell, take my spot on the couch, and eat my food.”

“Don’t be so selfish. We need to open our hearts and home to those less fortunate.”

“But they aren’t even grateful. And they roll their eyes when I say it’s their turn to clean the cat box. If I had acted like that as a kitten, you wouldn’t have tolerated it.”

I try to get Princess Petunia to think more positively by appealing to her more sophisticated side. “Listen, you can be their role model.”

She knows I’m trying to manipulate her and, without answering me, walks across my keyboard.

Now that science has put an end to the argument on whether cats or dogs are smarter, I’ll keep my mouth shut when my dog-loving friends — their pockets bulging with canine treats — show me all the tricks their mutts can do.

I will hide my smugness with a smile knowing that Princess Petunia would NEVER stoop to such antics. She’s waaaay too smart.